The narcissism of details

I don’t mean to pick on Old George, but he really slept around. A lot.

Have you ever noticed that the official messaging for a historic house site  usually involves an obscure detail? The most obvious – “George Washington slept here”. I have been stunned to learn the sophistication that some house museums have in defining they’re messaging and outlining their importance. It has ranged from the first house to have indoor plumbing in the area, to the first house to use nails, to the biggest, tallest, heaviest, house with the most glazed windows, or the best moldings in the southeastern part of the state. Still another avenue of description defines a house as the only museum that exhibits male/female/ /animal/children/servant/ life of the 1845’s in West Middletown. Yet another battleground is the age of house museums. Never have I seen such visceral word-smiting take place as when two house museums are arguing over which is the oldest.   Once the age argument is won, then the battle for the area of jurisdiction takes place– so much so that what we get is something like… “. Oldest house in the southern county… “.

If you are lucky, your historic house museum might be the oldest house in the county with clapboard, indoor plumbing and exhibits animal life of the 1830’s. The possibilities are overwhelming – and ultimately internal eye-rolling.

What the narcissism of details does to us on an everyday level is that it makes house museums extraordinarily territorial and adversarial toward other house museums. We feel the need to stand out in a crowd of thousands and in order to do so we must locate that sweet spot of messaging that will bring in the masses to tour our sites and leave behind donations. But in reality, to me, it becomes white noise.

This battle of significances is tied to what I also call the mythology of “a period of interpretation”. I feel so suffocated by all of this artifice at house museums – I understand that the period of significance is mandated by the authorities to pass a landmarked status on a property, but let’s get real – it is simply a professional construct to organize a normally messy, real-life existence. If what we are looking for is AUTHENTICITY in our lives, I suspect that the complex authenticity we are seeking is not to be found in artificial categories or meaningless tag lines.

I would propose a new paradigm to define these special cultural pots on our life path – How about they simply are houses, built – lived in – and loved by people just like us. Ill-defined, messy, complex and not at all professionally manicured.

In everyone’s life there is a list.  A list of details that define who we are and what we think is important to complete in order for our existence to be successful. I just wonder if what we have done to historic house museums has erased the everyday, mundane list and replaced it with the gilded, super-spectatcular list?

When walking around New York City, I am always struck by how complicated and messy the lives of buildings are.  The same building contains many lives and businesses.  One goes out of business, while another thrives.  One family dies off while another younger family moves in. In reality, who is to choose the “period of interpretation”?  Whose story are you telling? 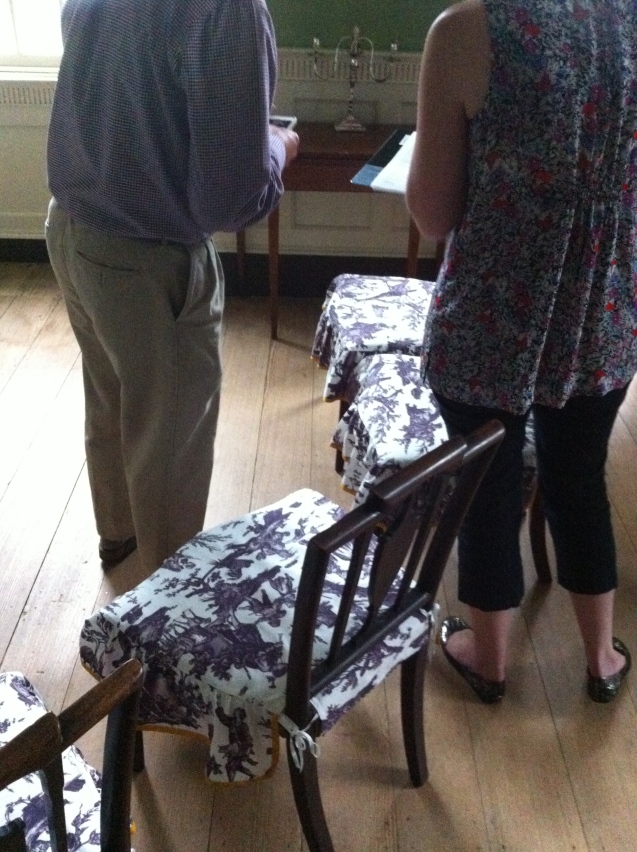 While meeting at a house museum, I was asked to participate in a discussion regarding the curated interior of a parlor room.  They wanted to visually express a “tea party” but were concerned that the room layout was wrong.  Should the chairs be in a circle or random?  I went to sit down on a chair and they stopped me – I went to pick up a tea-cup and they stopped me – I went to pour some hot water for tea and they stopped me.  My answer was that it was not a tea party if I couldn’t get some tea and sit and chat with all of my new friends! I can’t help but to feel that we were all lost in the narcissism of the details.

I anxiously awaited visiting a house museum that has taken great efforts to re-think the basics of house museum experiences.  I agree, many parts of the visit were great (I wish them good luck on further efforts), however one aspect stuck out as obviously left untouched – It was still a guided tour where we all stood around and listened.  It felt like to me that part of the re-thinking might take into consideration that we were tired, hot and still interested and we would have liked to sit down and enjoy the room.  There was an effort to not have a traditional period room collection-based experience (which is great), but in re-thinking, perhaps the narcissism of the details took over and we forgot about comfort?  Just a thought.

8 thoughts on “The narcissism of details”