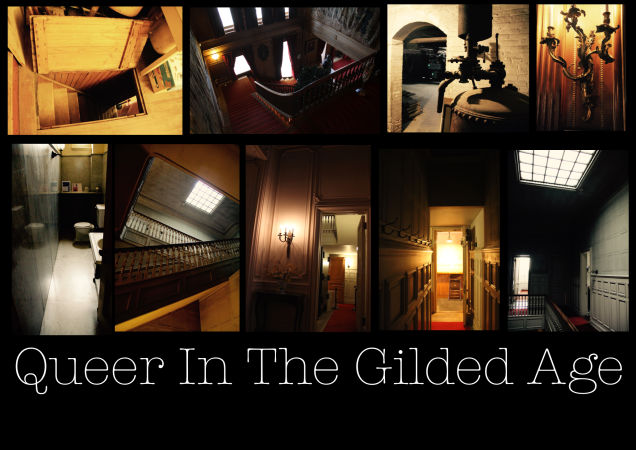 Queer in the Gilded Age (QitGA), a multi-year research project financed by the New York State Department of Parks, Recreation (NYSPR) is aimed at developing a house museum tour intersecting LGBT+ history with that of a mansion’s Gilded Age history.  Using the Staatsburg State Historic Site as a test pilot location, the project synthesized its primary Queer in the Gilded Age research and found key links to that site’s specific history. This intersectionality allows for an adaptable and transferrable tour development model, applicable to a large number of historic sites and cultural entities.

“Architecture on the inside is not always what it seems on the outside. It can be codified and secretive and only reveal itself to those in the know, similar to the codification of the more cautious homosexual community that existed during the Gilded Age.

Those who enter the inside of the Mansion notice that its quirkiness and oddness (split-leveled floors, abrupt up and down hallways, staircases where they wouldn’t be expected, and oddly dark corners) deviates from and defies the seemingly symmetrical perfection of the publicly viewed outside facade.

Homosexuality, during the Gilded Age, often had a hidden interior that defied the exterior – things were not always what they pretend to be. There is more to a person – or a Gilded-Age mansion – than meets the eye.  Let’s try to uncover, analyze, and experience this house from an ‘off-center’ perspective.

This project is being funded through the